Feces-packed stalls with little light; dark, dirty dead animal bones strewn throughout the barn; a dead goat was being used as a compost pile. This was just a small flavor of the horrendous living conditions that 34 animals and 20 birds endured. But no longer will they have to live this way.

On Thursday, July 30, the Pets Alive team started out early in the morning to work with the Ulster County SPCA Humane Law Investigations Division and rescued 1 dog, 3 cats, 1 rabbit, 2 turkeys, 2 geese, 28 goats, 1 sheep, 1 duck, and 15 chickens. Our friends from Catskill Animal Sanctuary were also on the scene and at the end of the day, they helped us transport 28 goats, a sheep, and a duck to Pets Alive. The remaining animals and birds were taken in by Ulster County SPCA, Arthur’s Acres Animal Sanctuary, and Catskill Animal Sanctuary.

It was a long, slow process of getting the animals and birds to safety. The stalls where the goats lived were beyond dirty; the rescuers had to climb up on top of four feet of packed-down feces and urine-soaked hay to reach the goats. In some places, there were less than three feet of space between the feces-packed stalls and the ceiling, making it impossible for some of the larger goats to stand up. The duck was living in a dog crate, laying next to a dead duck.

Each animal and bird was documented by law enforcement and examined by a veterinarian as they made their way to the transport trailers. One goat was unable to walk because the goat’s hooves were overgrown by 6+ inches.  The veterinarian administered immediate aid to the farm animals, including trimming their hooves so they could walk without pain. Additionally, one of the baby goats has an infected umbilicus (belly button), was treated at the scene, and now continues treatment at Pets Alive.

The team made it back to Pets Alive late on Thursday, after a 12+ hour day of getting the animals to safety. In total, 29 farm animals and a duck are now freed from their abuse and are safe at Pets Alive. One by one, they came off the transport trailers unsure of where they were but gleefully followed our staff as they offered feed to the goats to coax them to their new living space. 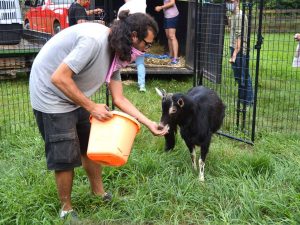 Some goats were placed in our pasture; they immediately ran through the field enjoying the fresh, green grass beneath their feet. 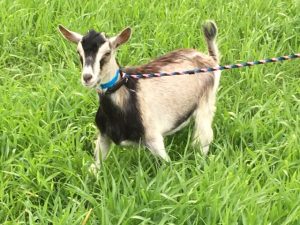 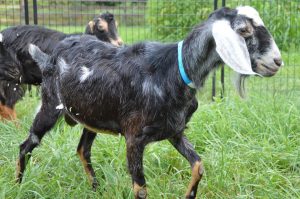 Others were placed in the barn, finding fresh straw and feed for them to munch on. 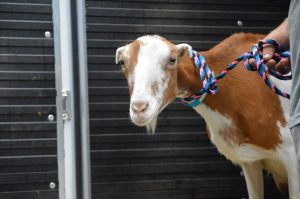 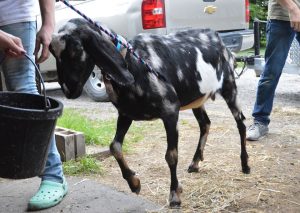 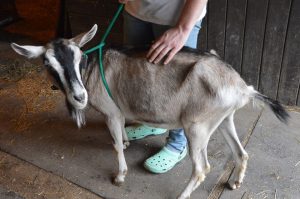 The condition of the animals that we took in is varied. The goats are in various stages of emaciation, with hip bones protruding. 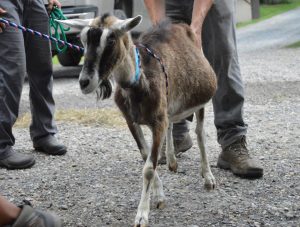 Another goat is close to giving birth any day now – we are watching her very closely.

Several goats appear to be in different stages of pregnancy.  A few other female goats were still nursing several young kids (baby goats).

The sheep has not been sheered, with wool almost down to the ground. 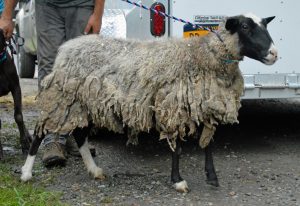 The duck is temporarily being fostered by one of our staff members as we don’t have the facility to care for ducks, and we’re working with a wildlife rehabilitator for ideal placement. 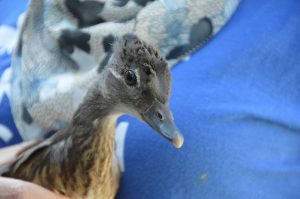 As the animals were getting settled, however, an emergency arose on Friday. When our team went to feed the animals, they noticed that two of the young goats were coughing, and one goat was lethargic and barely moving. They were rushed to Catskill Veterinarian Services, PLLC for emergency treatment. Two of the goats were examined and were given an antibiotic injection for an infection. They were sent back to Pets Alive after their condition improved; the antibiotic treatment will continue until they recover.

A third goat, however, was hospitalized. She had a low body temperature, was treated with IV fluids, and was tucked under a “bear hugger” blanket warmer to raise the goat’s temperature. Blood work was also drawn. 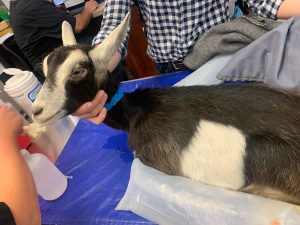 One of the goats that was rushed to the vet on Friday undergoes an examination. 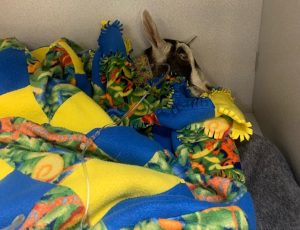 She is now hospitalized

In the days ahead, the veterinarian will be doing an examination of all the animals to determine the extent of their abuse and prepare needed treatment plans. Meanwhile, the animals are adjusting to their new living space and will have access to fresh water and nutritious food – and a pasture where they can graze. We are also anxiously awaiting the birth of some young ones so the family of goats will grow!

It will be a long haul for these animals before they are healed from their abuse. You can make a huge impact on their journey by donating today. No gift is too small.

If you prefer to order supplies for the farm animals, please contact us at info@petsalive.org for information about our daily needs and where you can order supplies.

Prefer to send a donation check? Mail it to us at Pets Alive, 363 Derby Road, Middletown, NY 10940. Please write “Goats and Sheep” on the check.

Thank you for helping these precious animals. All they want is love. Your gift will truly make a difference in their journey towards good health. 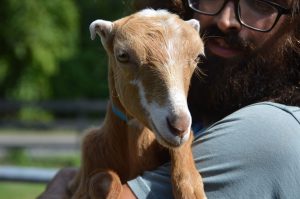 Your help is most welcome! Pets Alive welcomes the support of the community in caring for the animals. For more information on volunteering, visit the volunteer page.